For CONDOMINIUM 'SIMES' project we got 1st prize on invitational architecture competition for condominium/ residental building in Dobrota. The condominium is more than a place to live, with a lot of benefits of life in.

The study of the urban matrix of Dobrota recognizes a strong spirit of the place defined predominantly by the fronts of stone houses in a row. The inspiration for the concept comes precisely from this established matrix, which results in a disparate form of architectural and artistic expression of a characteristic Mediterranean character. The genesis of the form strictly relies on the immediate surroundings and ambience of the Bay of Kotor, so that the newly designed building would not disturb the context of the built structure in which it is located.
The architecture of the building is developed by placing the basic corpus longitudinally so that the front of the façade is oriented towards the sea along its entire length, and the fragmentation of the structure represents an answer to the typical traditional urban fabric. By shifting the volumes, the form develops, and the building fits into the context, creating the impression of a cluster composed of 5 separate houses in a row. The design of the roof slopes simulates the principle of traditional coastal architecture, reinterpreted in a contemporary way. The segments of the structure are accentuated by overhangs, and interconnected by a common corridor that is perceived as a secondary form of the composition. 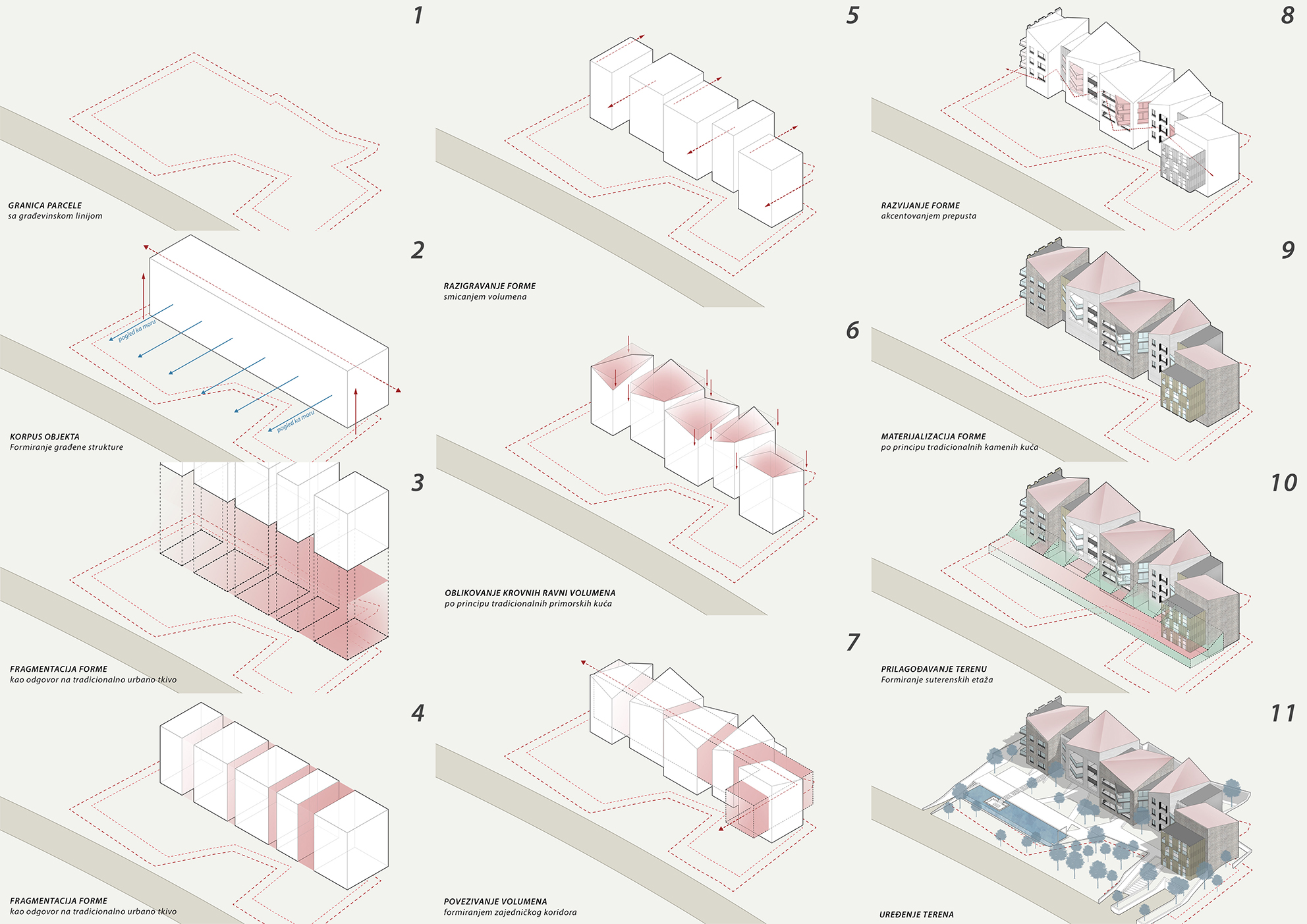 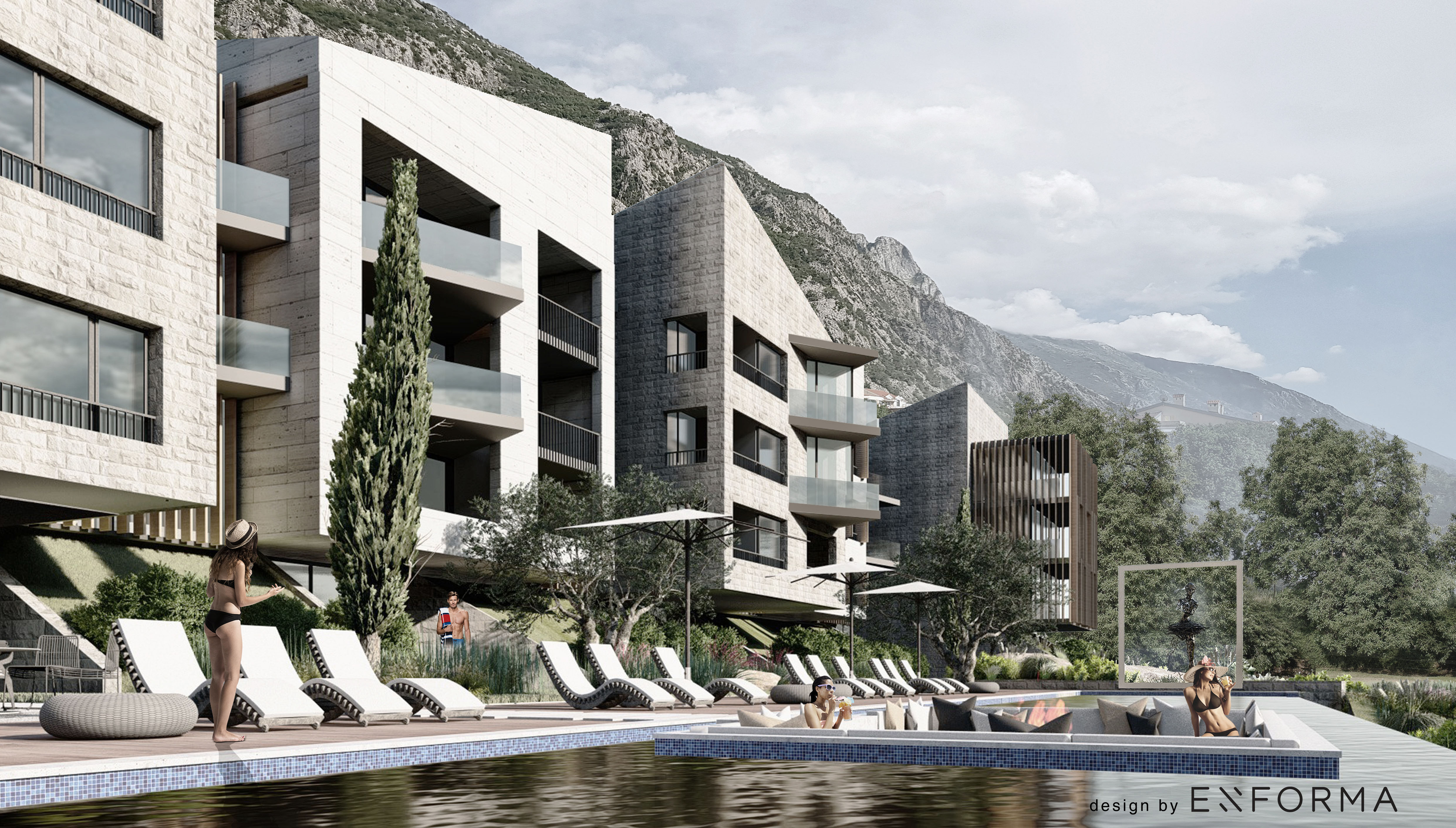 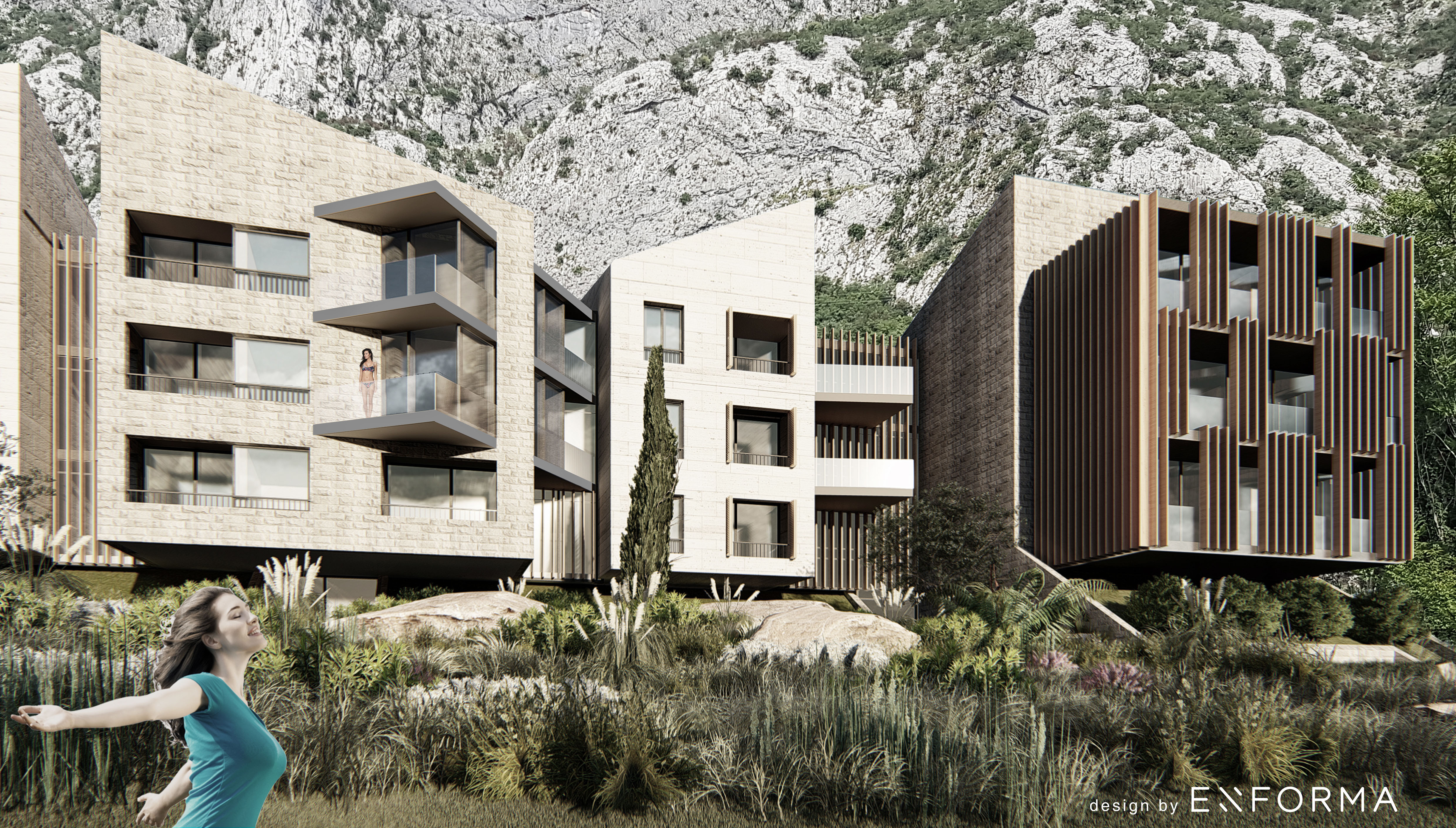 Adaptation to the configuration of the terrain of exceptional steepness was achieved through contact with the mostly buried basement floor, which leaves the impression of units hovering over the green terrain. Local natural materials have been implemented using several types of compatible stone cladding, in order to preserve the identity of the Mediterranean ambience and nurture the traditional architectural heritage. 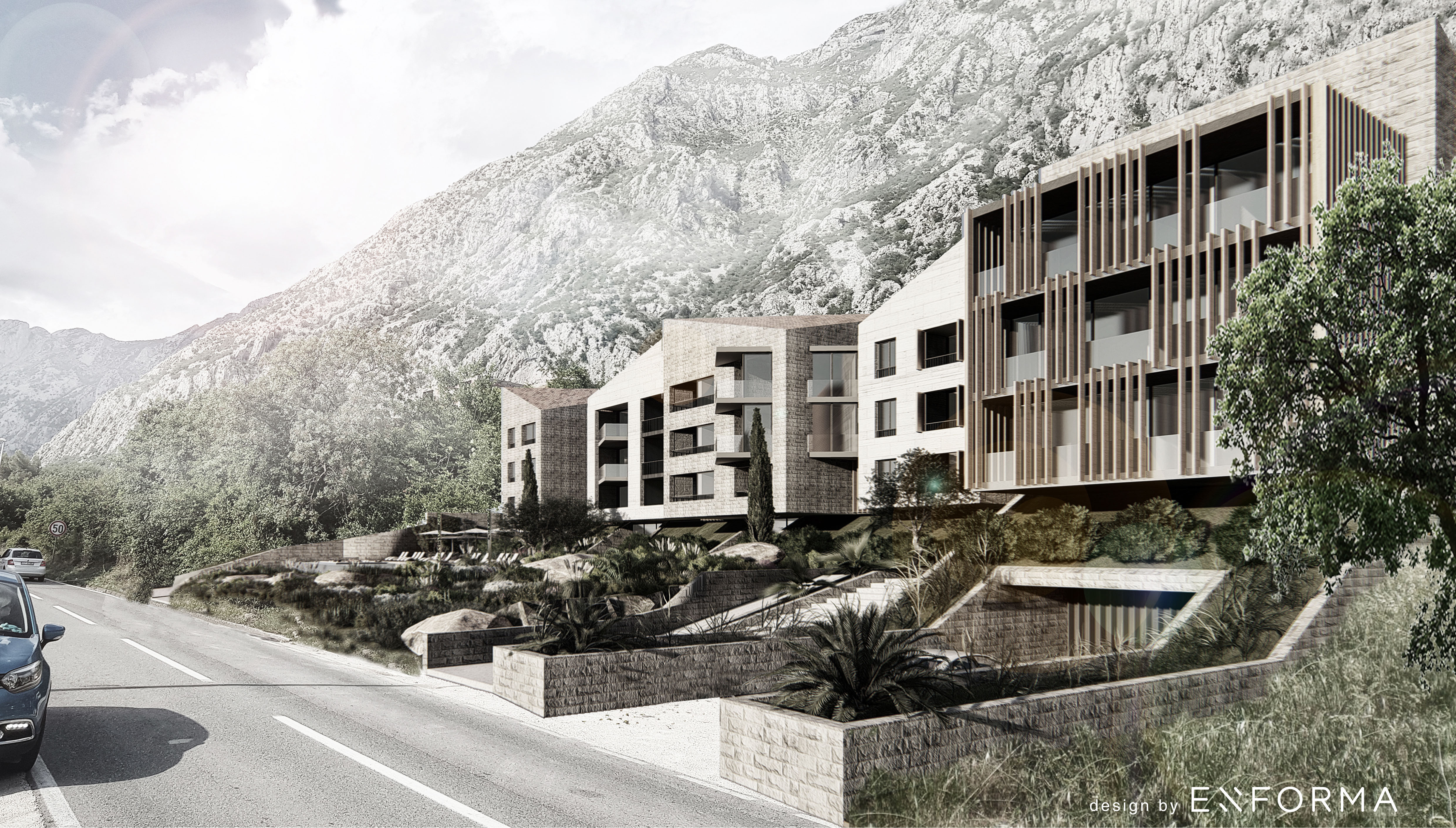 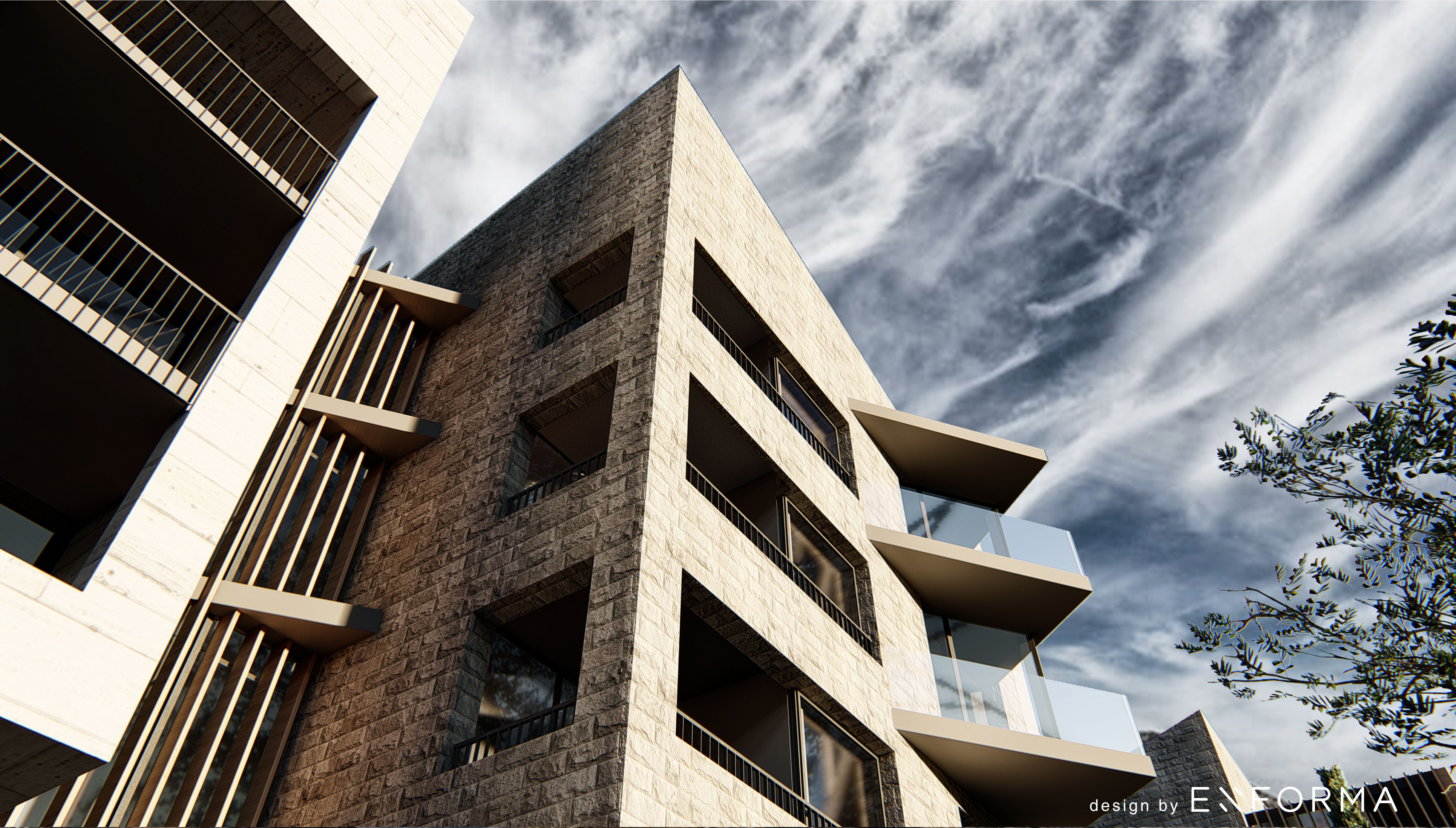