The starting point of the conceptual urban-architectural design of the “House of Fruit” is based on accentuating and fully respecting the landscape. Since this is a structure which is used for production and education purposes, this approach gave us a lot of creative freedom.
Construction in similar locations always poses the question as to whether architecture is really necessary. Such deliberations have resulted in the design of an architecture which is devoid of itself. This is a building with no façades and is designed as a structure covered over by the excavated soil, which creates a green carpet by which the roof or the green roof surface is connected with the structure’s function. Seedlings of blueberry bushes, olive trees, etc. are planned to be planted on the roof so that it can be used to educate the population, while returning a part of nature that had been taken away. 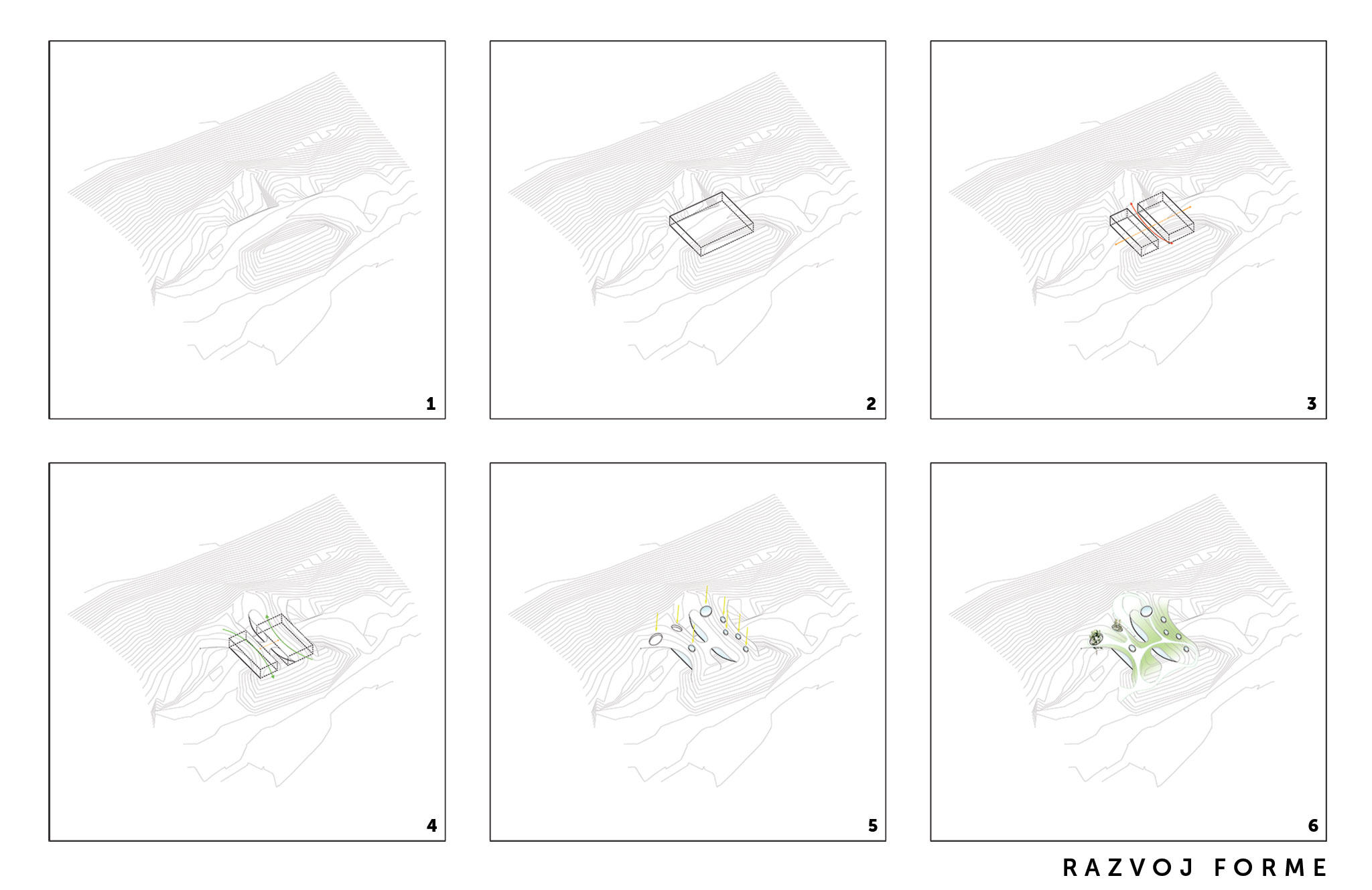 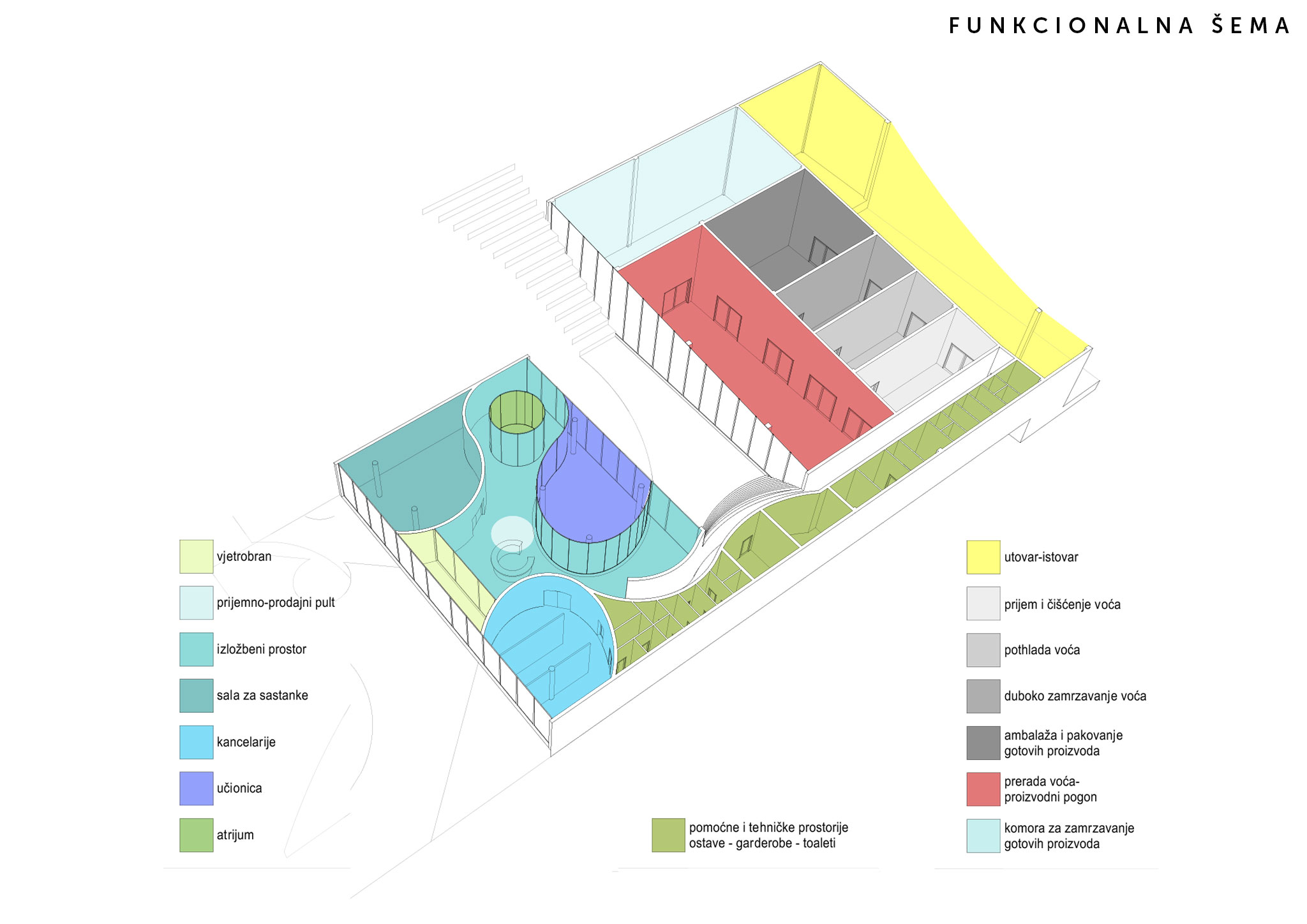 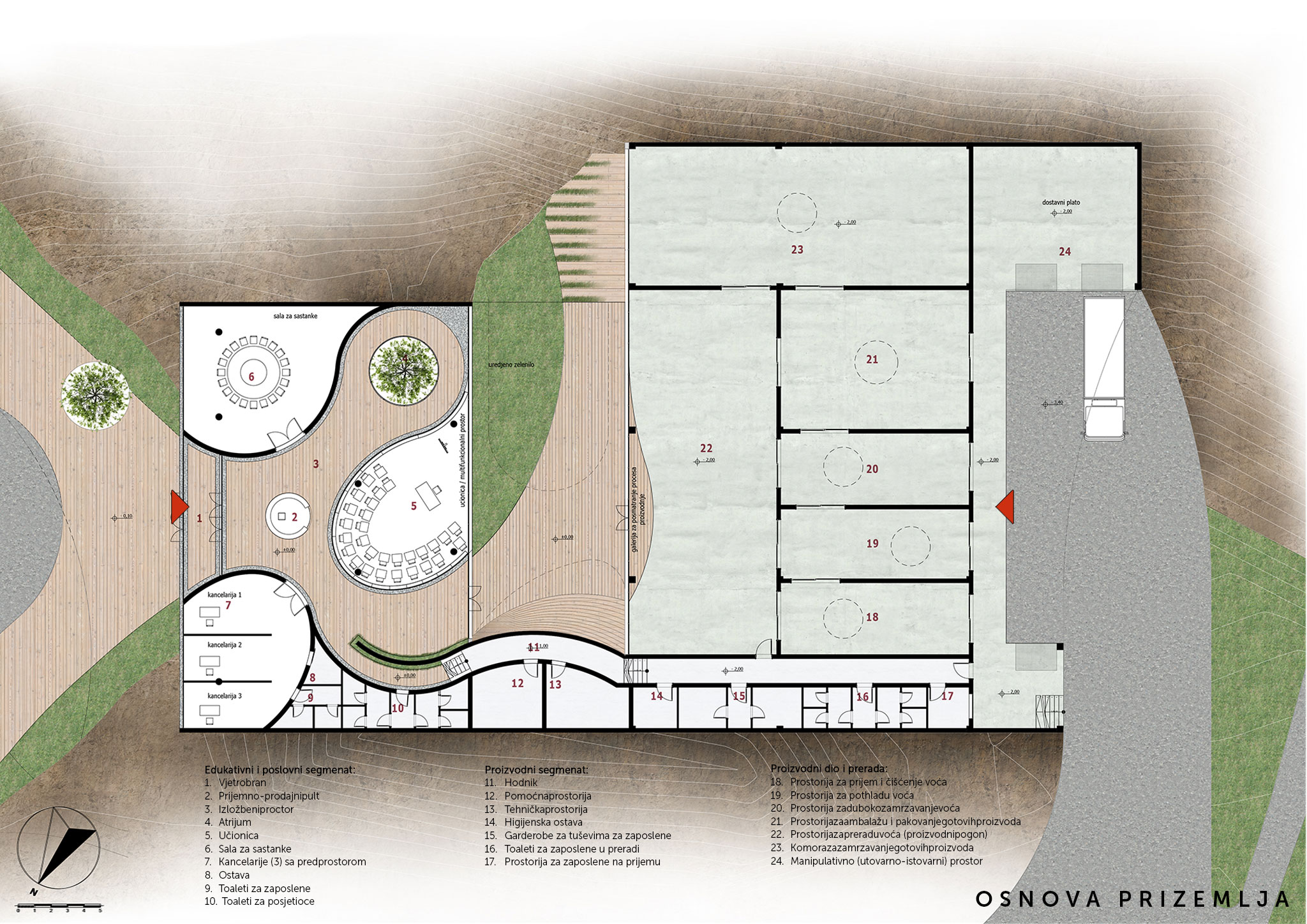 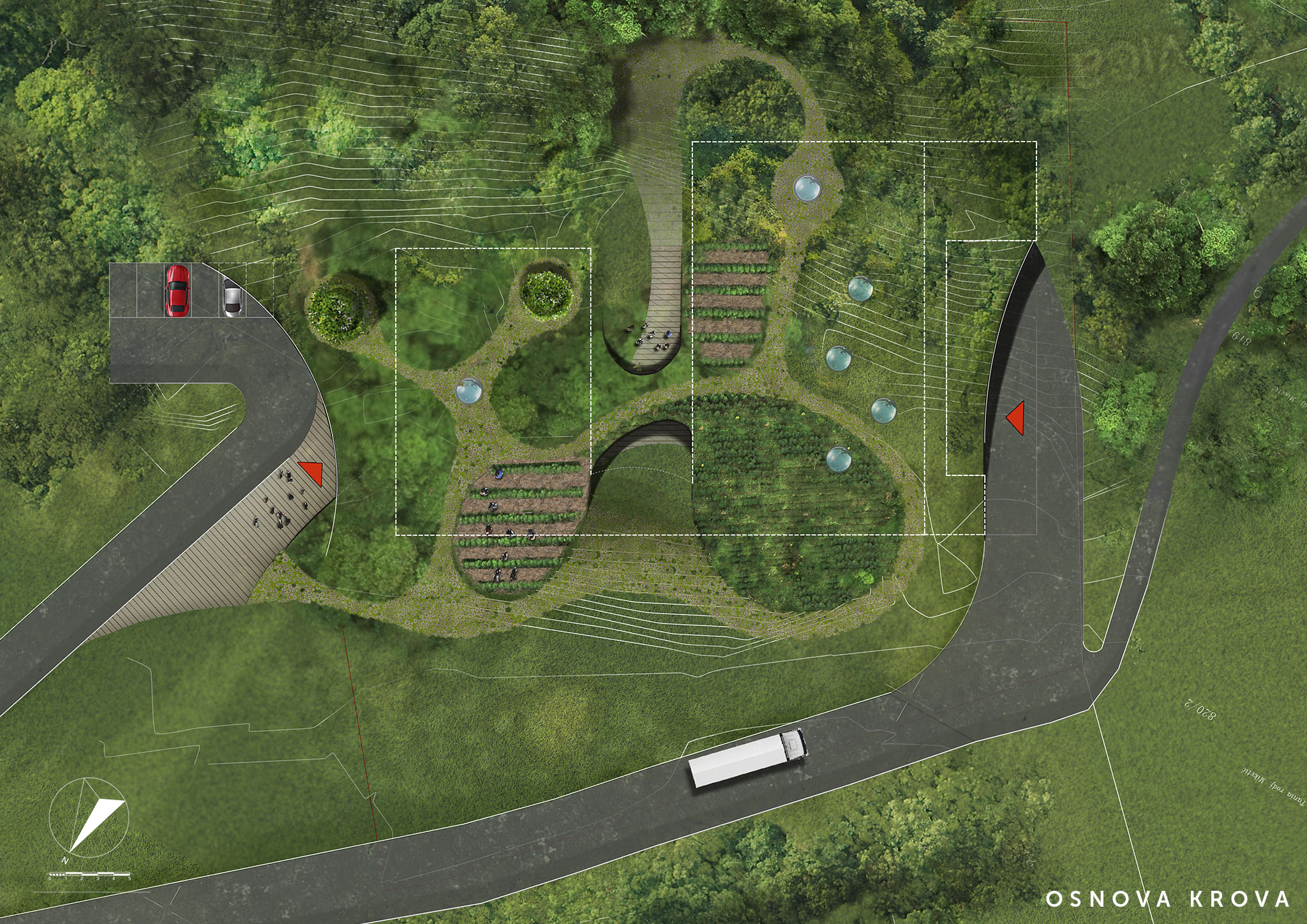 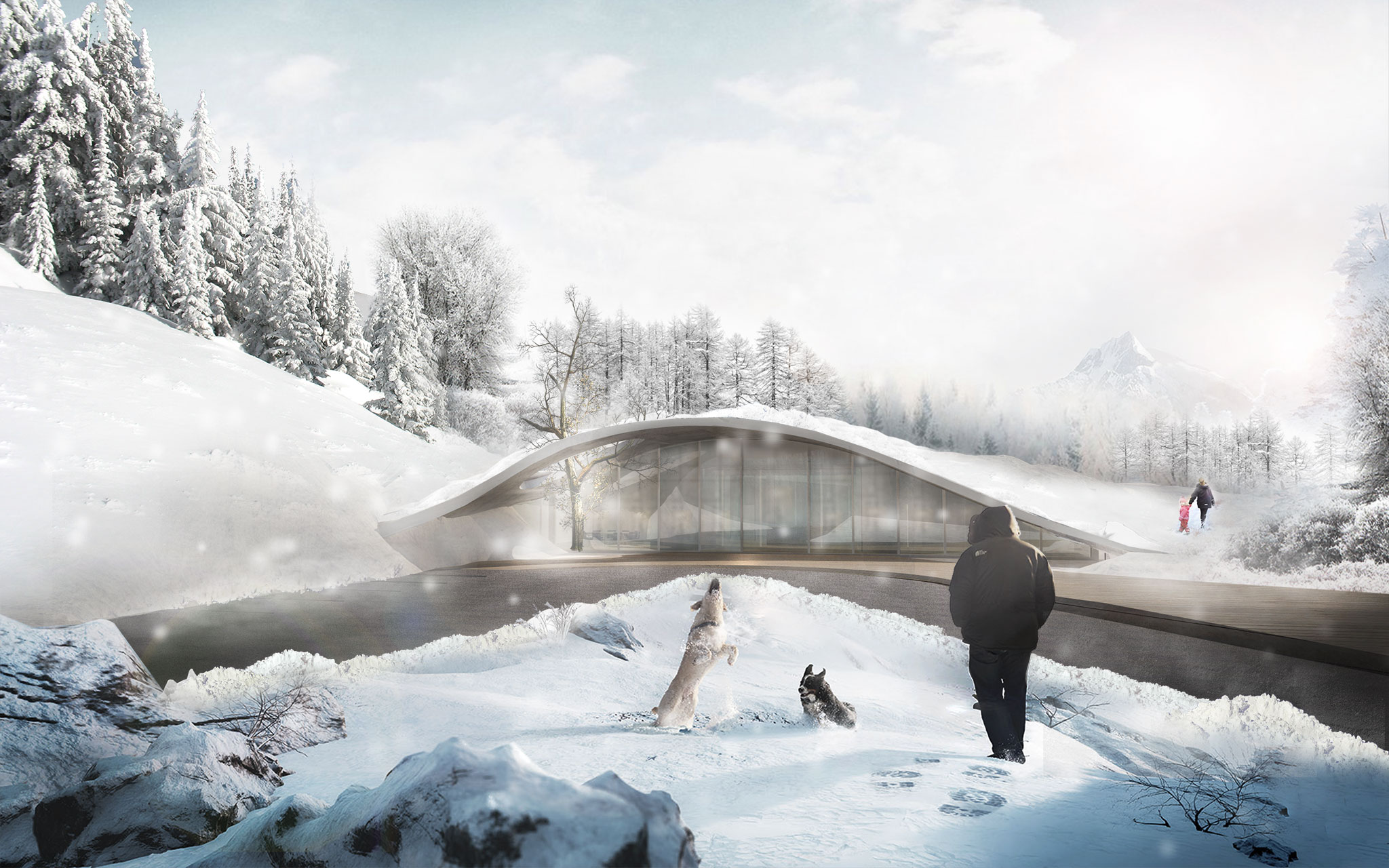 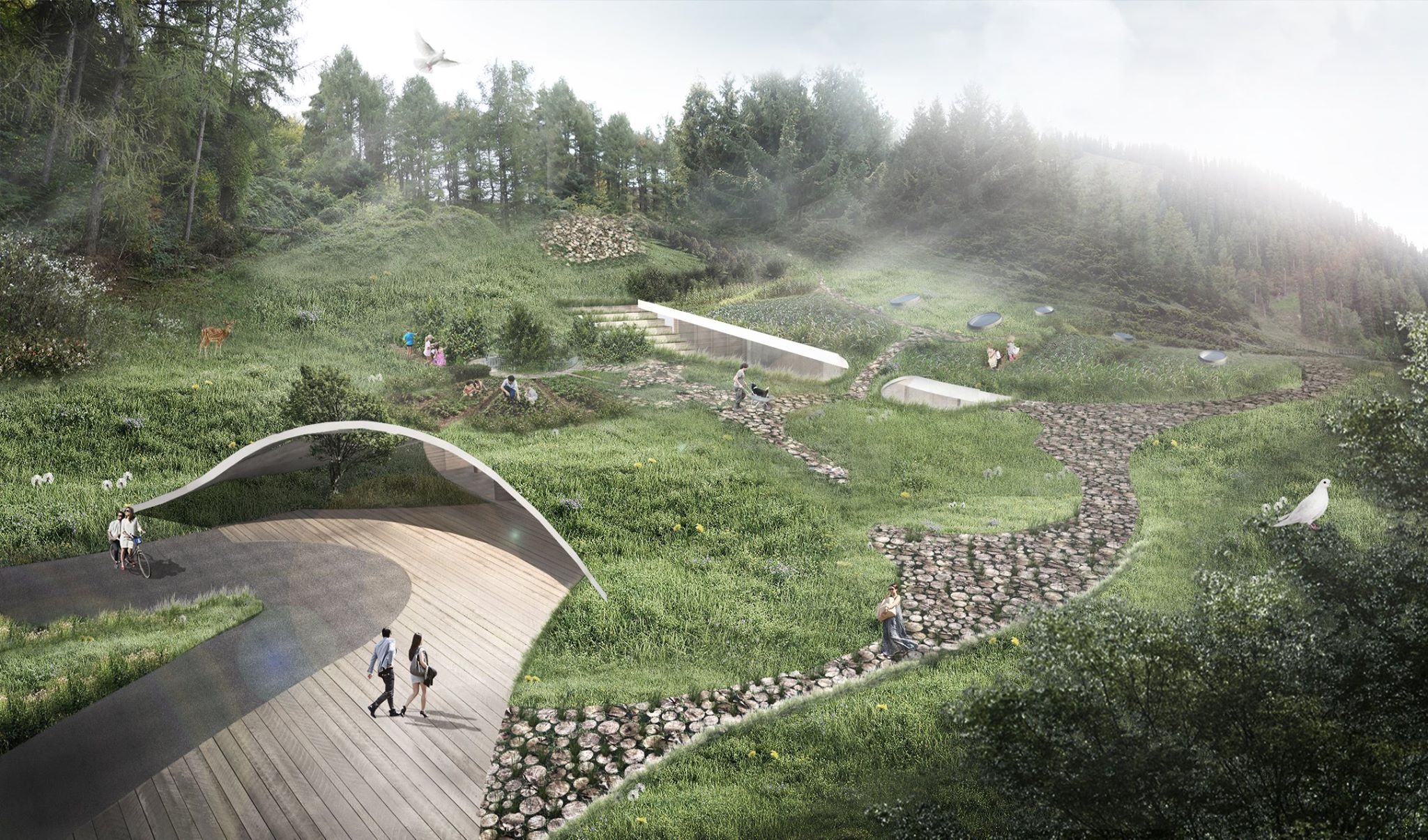 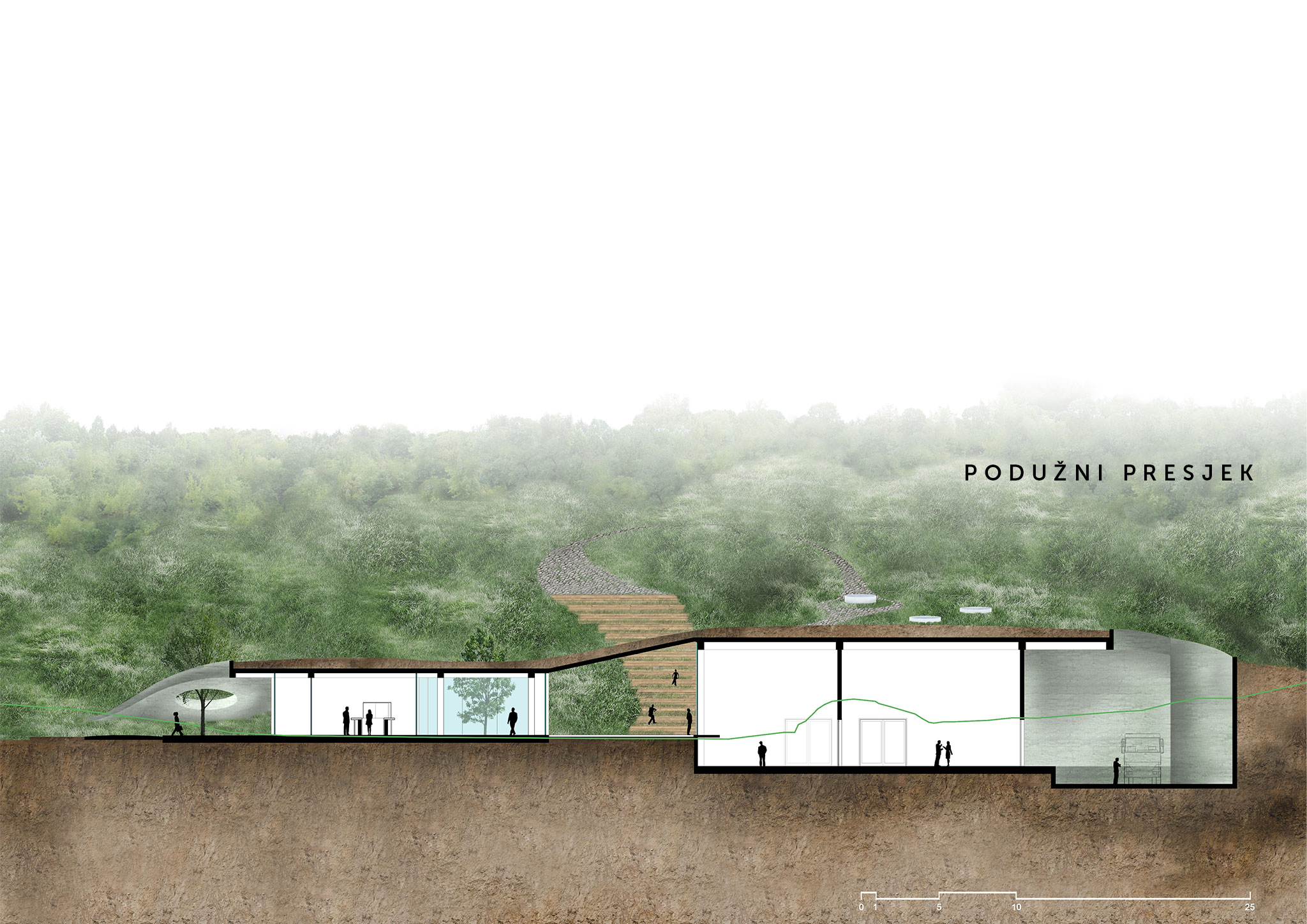 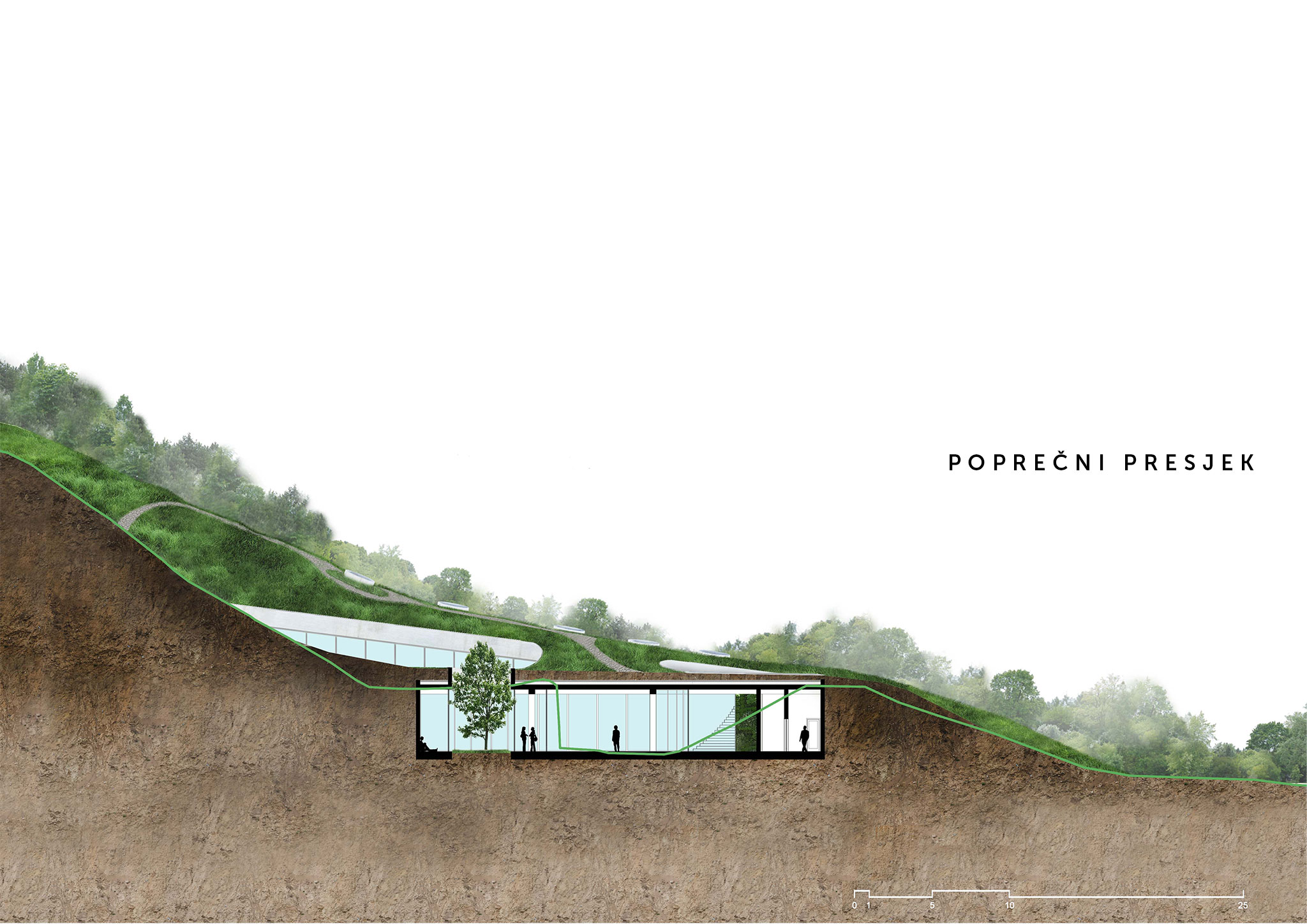 There are two accentuated zones of entry which are located opposite each other (the main and service entrances), which are an affirmation of the building’s presence in the terrain, while all the other classical architectural elements, such as façades, have been left out. By focusing on the integration of the structure into the landscape, the green cover becomes its inseparable and integral part, and the structure becomes a natural extension of the landscape.
The building very easily fits in with the existing environment by introducing nature into the structure and by activating architectural elements, such as the atrium and the roof, with new, alternative functions. The proposed solution of the “House of Fruit” is characterised by a modern and different vision for a building intended for fruit production in the 21st century.
The geomorphic characteristics of the terrain and the natural beauty of the area provided the initial idea for the design and realisation of this building which has educational and production purposes, by negating architecture and stressing the beauty of wild nature that the structure is becoming a part of.
The building is positioned in the gap between two hills and covered with a green roof, which makes it a natural extension of the surrounding greenery. There are two accented entrances on opposite sides (main entrance and economic) by which the presence of the building is revealed while all the other classic elements of architecture are omitted. To preserve the value of the environment we turned to the natural elements and the manner of their integration in the newly designed and built one. 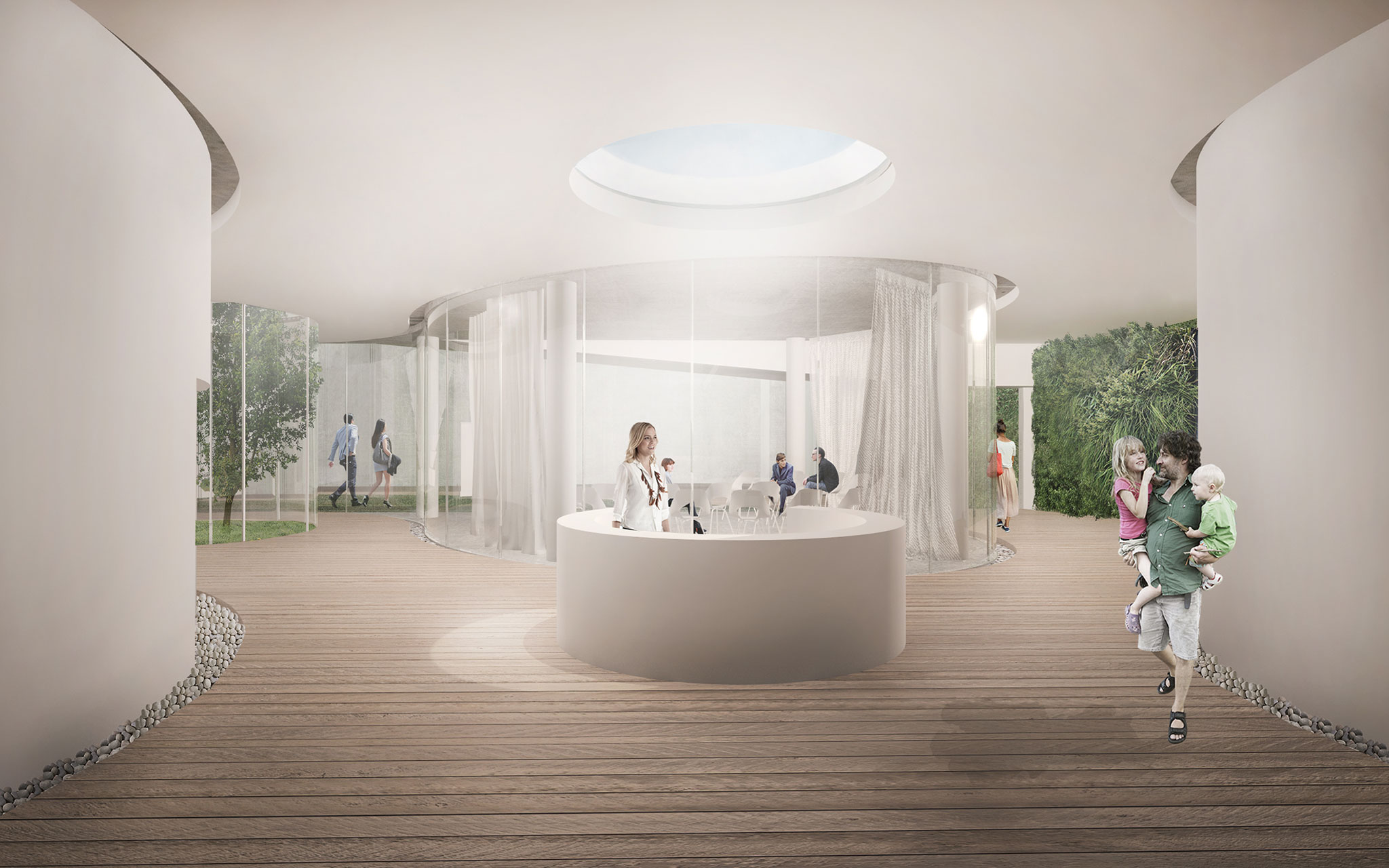 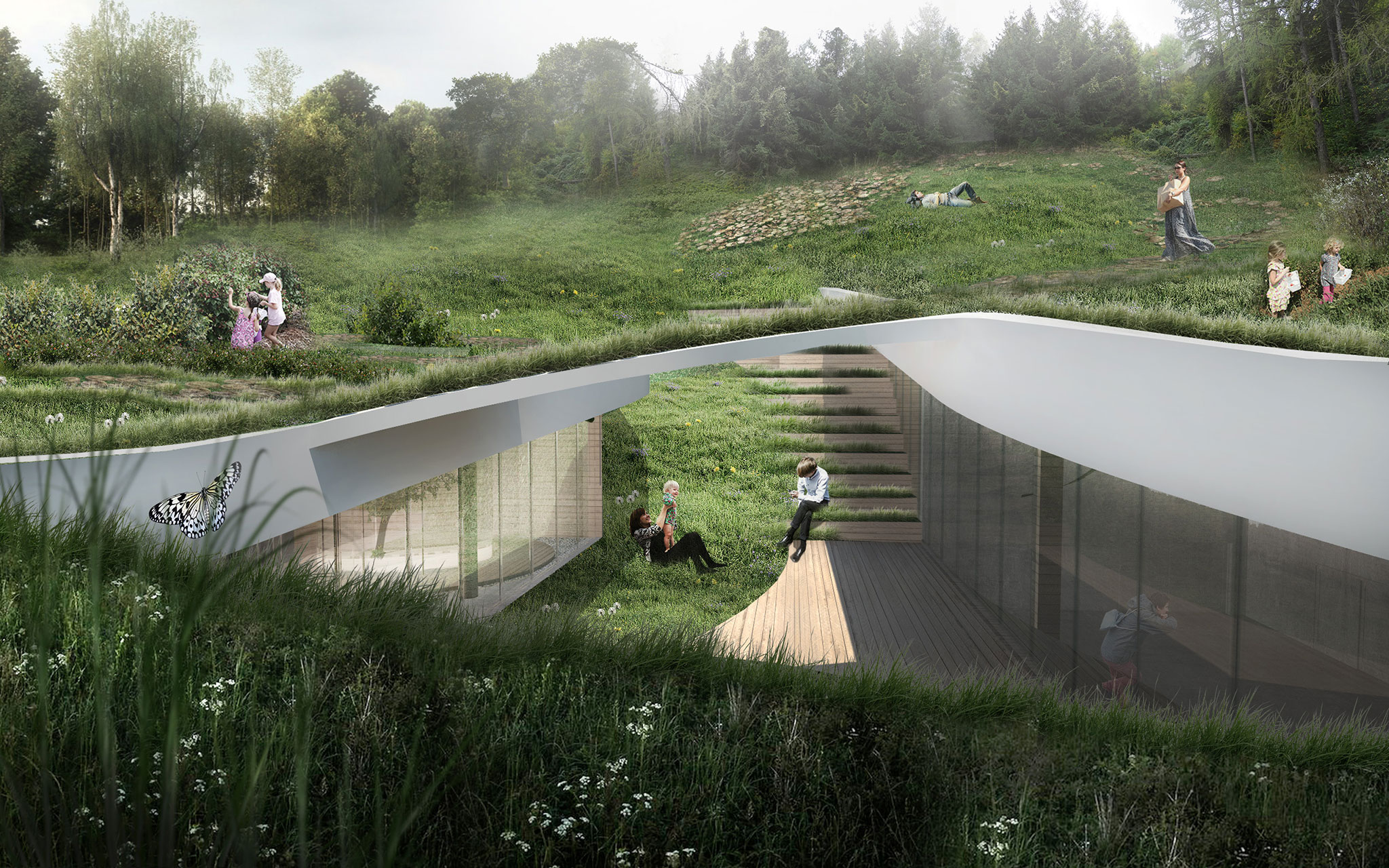 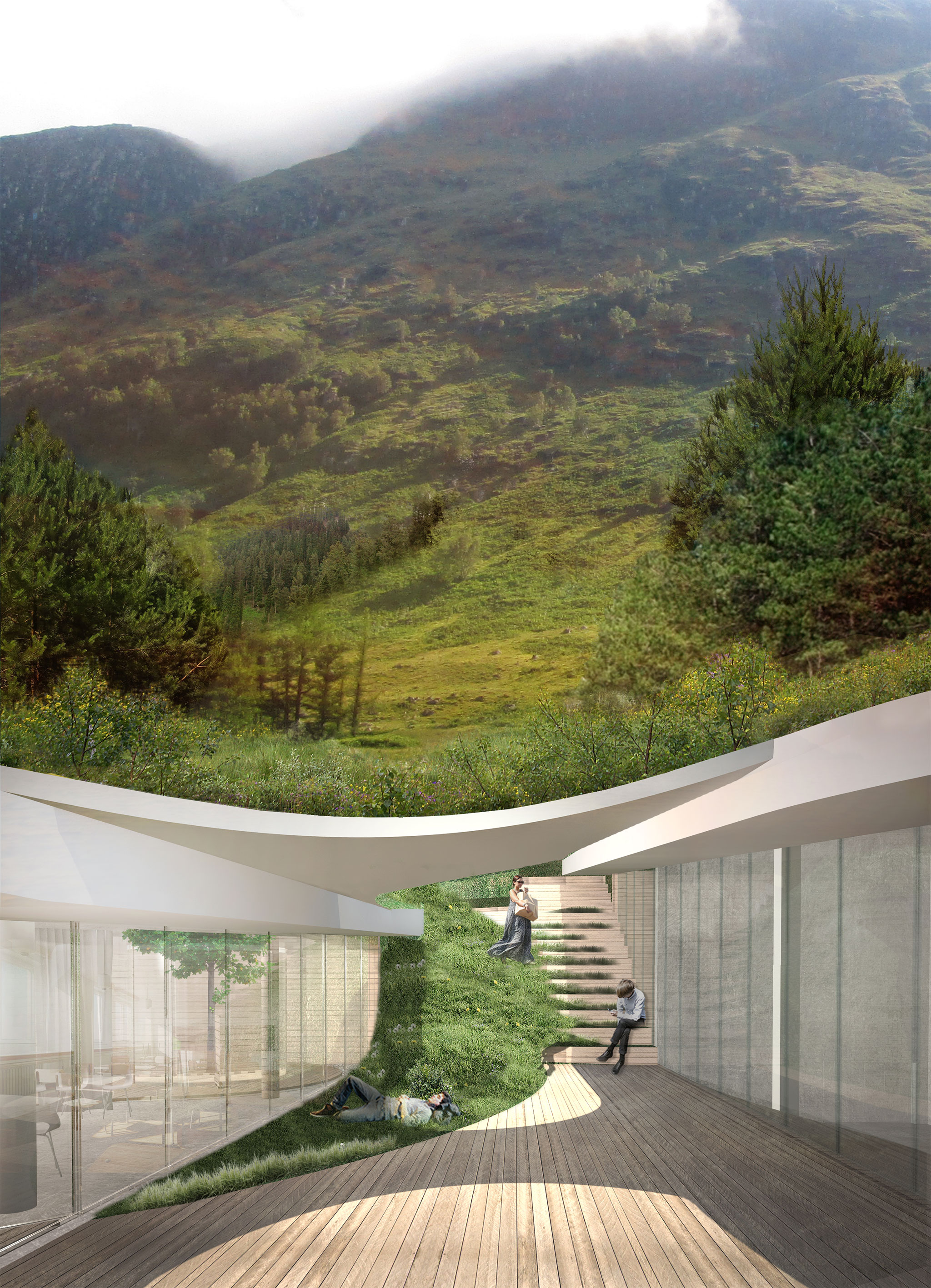 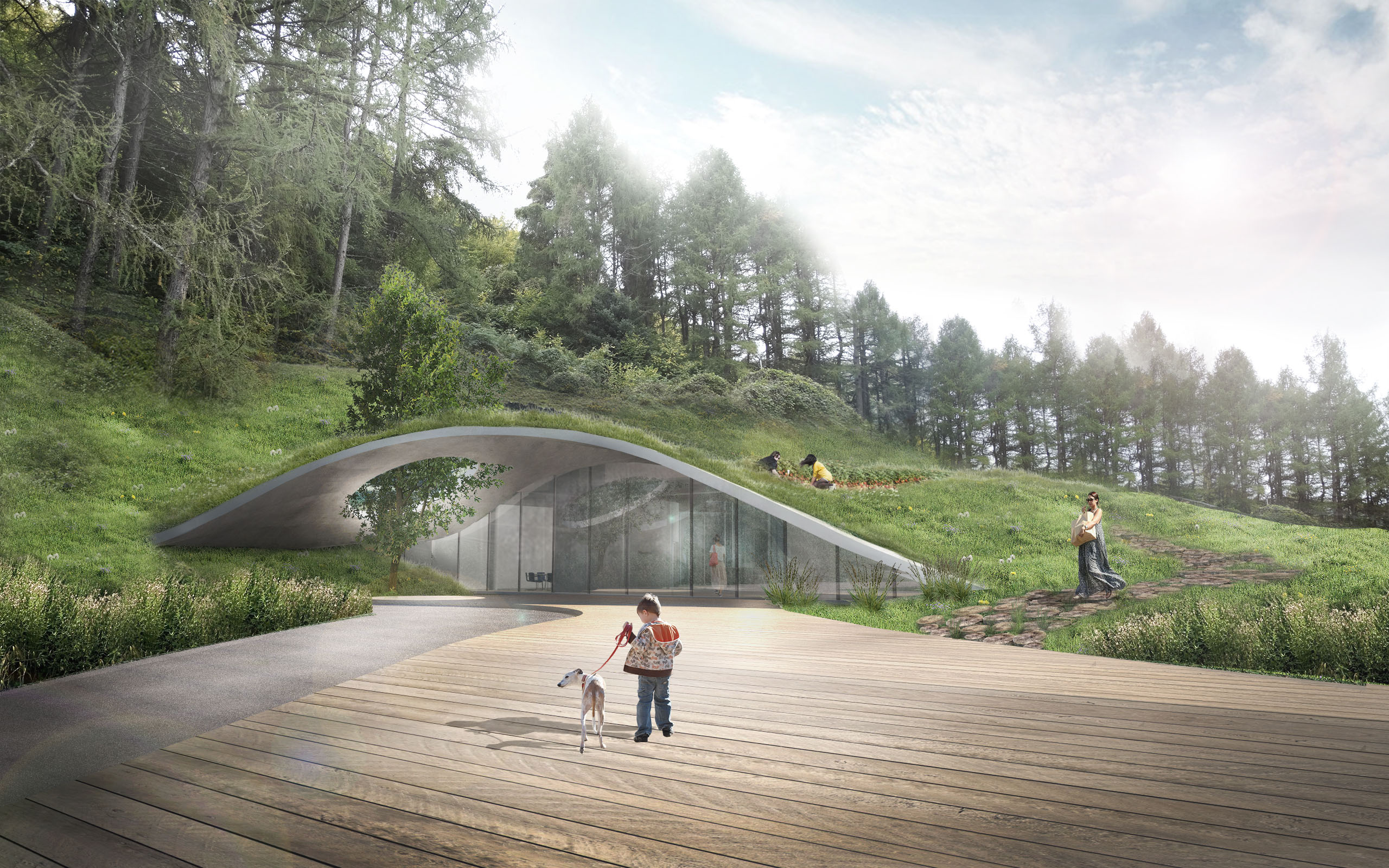