STUDY OF THE FORTRESS OF THE HOLY CROSS

RESEARCH
Perast Fortress, popularly known as the “Kaštel” (Castle) or “Forteca Svetog Krsta” (Fortress of the Holy Cross), was built at the highest point of the town, on a plateau at the foot of Kašun Hill. There had been a church in this same place from ancient times, which in the municipal records of 1743 was said to be the oldest church built by the inhabitants of Perast themselves.
The first detailed archival, archaeological and architectural research at the site of Sveti Krst (the Holy Cross) resulted in a relative construction chronology and a stylistic analysis of the complex. The key stages of construction and modification have been distinguished, and data has been collected on how the fortress functioned. 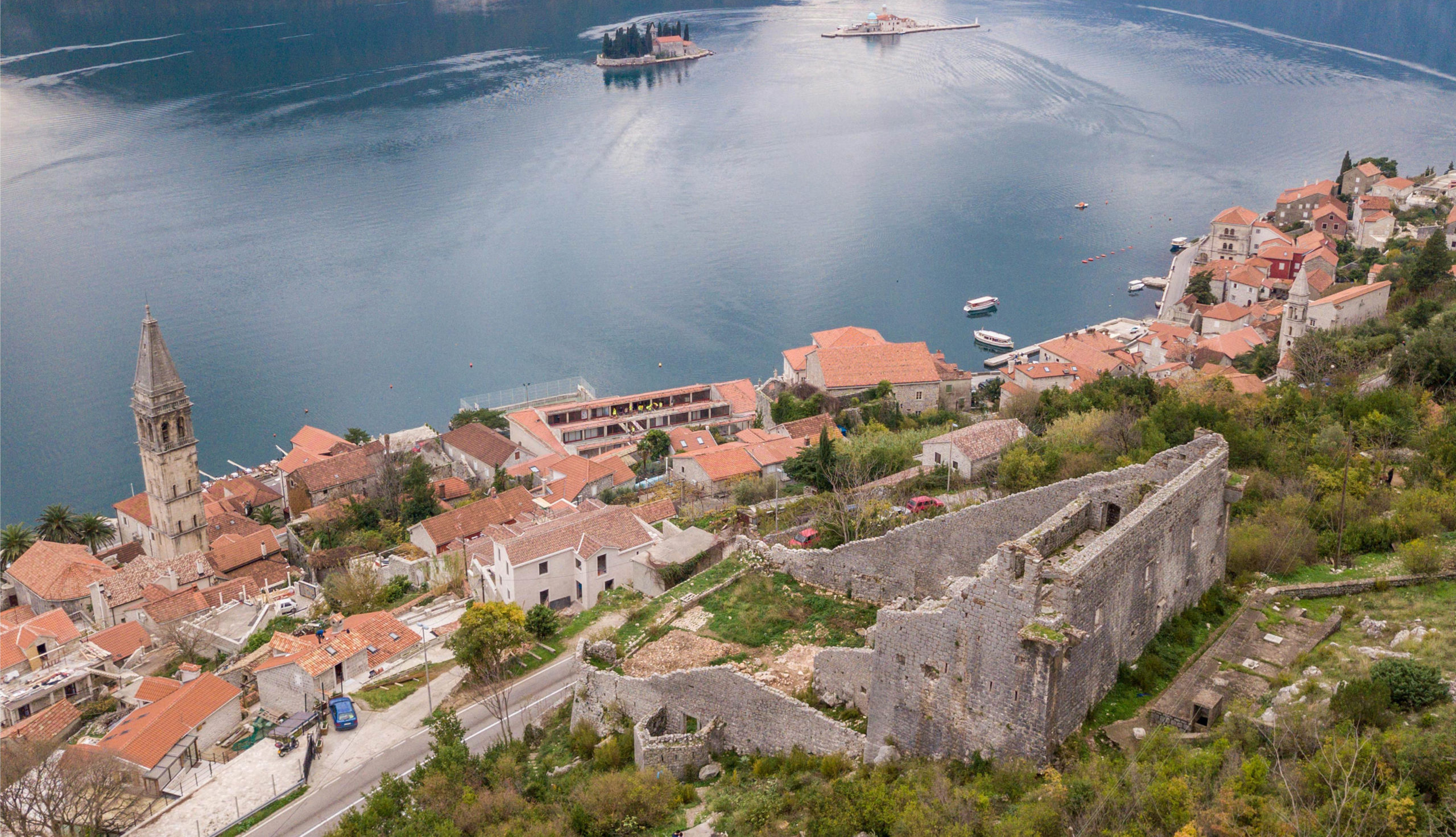 The existence of the Church of the Holy Cross, after which the fortress was named, has been confirmed, but no reliable sources have been found regarding the time of its construction. The discovery of flattened rocks, as well as isolated paving areas oriented independently of the fortress, indicate the structure that preceded it. The matching up of traces on the ground with the position of the church on Austrian plans from the beginning of the 19th century leaves no doubt that this is that missing
church. Research shows that this earlier church was demolished in the early 19th century and its stone was used for further construction on the site. 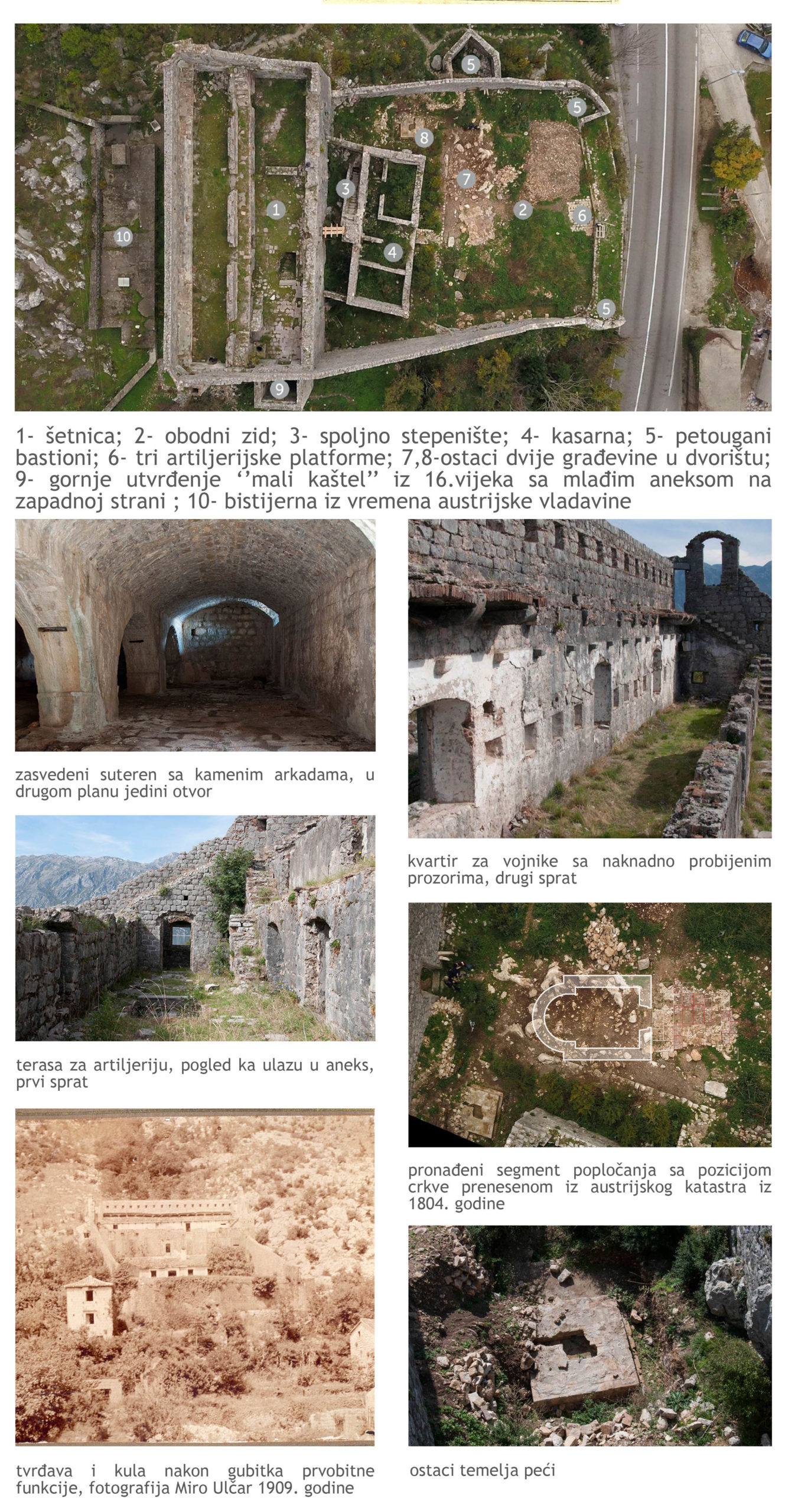 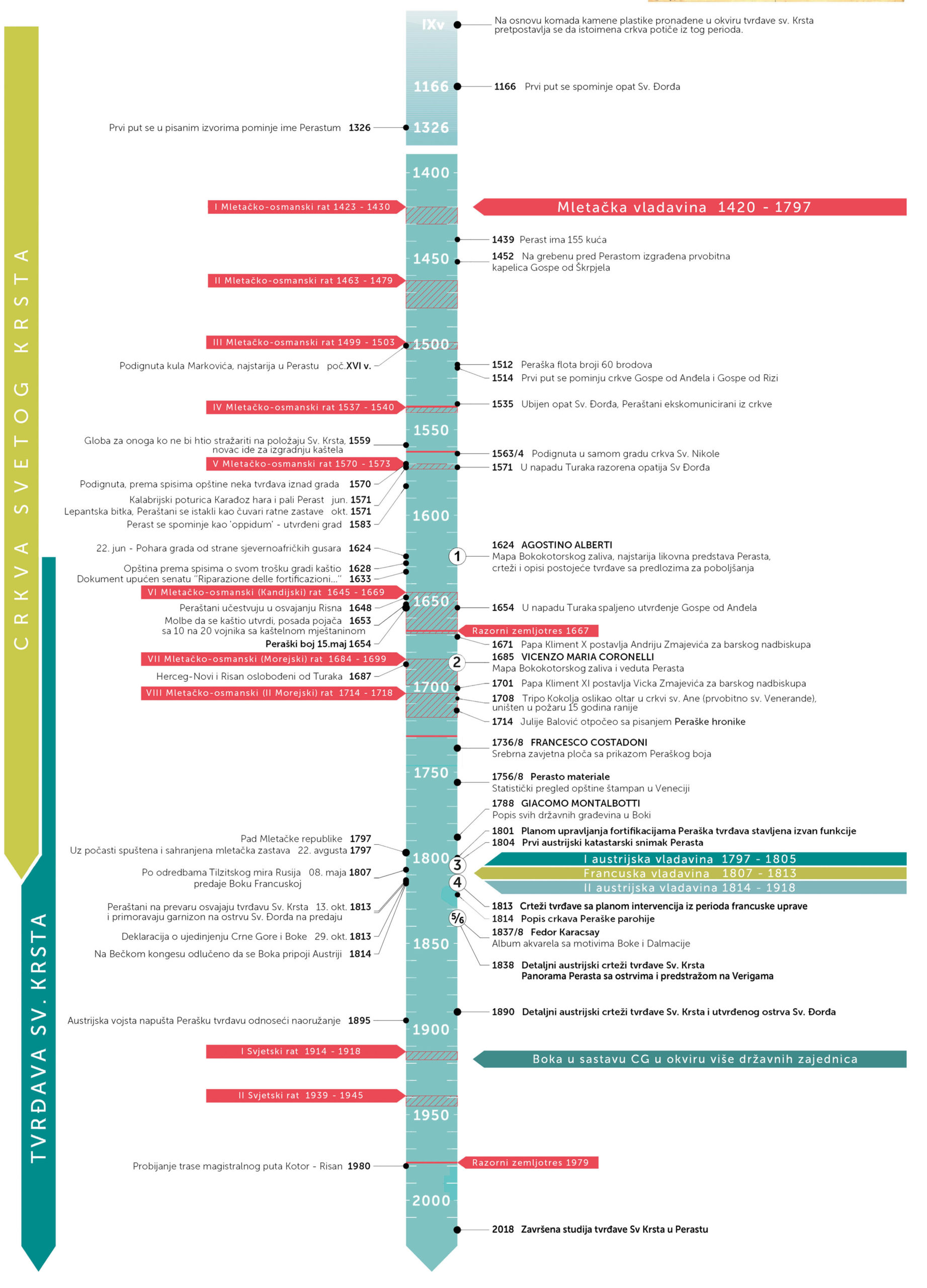 RECONSTRUCTION PROJECT
The reconstruction primarily refers to extension of the perimeter walls and ramparts that were damaged over many years, as well as reconstruction of destroyed parts of the fortress itself and the officers’ house. The reconstruction of the entrance bastion covers the existing walls, loopholes and the roofing (with a very discreet flat roof), in which a ticket office, an information desk, as well as a small gift shop will be housed. At the exit from the bastion, a ramp for persons with disabilities is foreseen, as well as a staircase – perforated and light – that leads to the existing stairway of the fortress. In the very courtyard, numerous events will be organised that are characteristic of Perast – concerts of Perast’s choirs, art colonies, a theatre stage, as well as projections of films. The Church of the Holy Cross, whose position and dimensions have been defined on this same location, will be presented in its original foundation and position, through 40-cm-high walls, as well as through its autochthonous paving that will be envisaged between the discovered flattened rocks. The original paving in front of the church (also discovered through archaeological research) will also be presented throughout its full length. Reconstruction of the existing plateaus where the cannons were situated, of which there were three in total, but only one of which remains preserved, is also foreseen in the courtyard.
The officers’ house is the structure that suffered most after the fortress had been abandoned. Its complete reconstruction is planned and a new purpose has been assigned to it. A café with a small kitchen and sanitary facility, which is located in the entrenched part in front of the fortress and is completely unnoticeable, are located in the officers’ house. During archaeological excavations, a small building was discovered in the courtyard of the fortress, which used to be a furnace for heating cannon balls, and the project anticipates its preservation and presentation.
The idea of the entire project is to provide new facilities, which will serve both residents and tourists, in the fortress courtyard with the officers’ house, which was built most recently, while the fortress itself will be presented in its original shape and purpose, as it is very significant for Perast and its inhabitants. Namely, certain parts of the fortress will be used as gallery spaces, but these will mostly be rooms whose original purpose, size and openings are preserved and these will present an epoch very significant for this town.
The fortress itself is accessed via the still-existing original stairs and a drawbridge. The plots of land around the fortress itself are intended for pedestrian and vehicular access, i.e. an internal access road, then for a large underground cistern as well as for an open-air amphitheatre. A smaller structure – a sanitary facility (toilets for men, ladies and persons with disabilities) is planned next to the internal road, as there was no space in the complex of the fortress where it could be located.